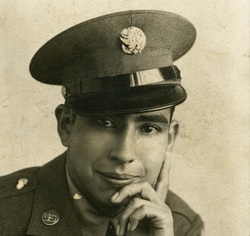 Pete G. Dimas was born in New Mexico and spent his early childhood in Albuquerque where his father worked in the railroad shops.  From the age of five on, his family moved numerous times throughout Arizona and California, but primarily resided in Phoenix and Albuquerque.  During the Great Depression of the 1930s, Mr. Dimas served in the Civilian Conservation Corps.

He volunteered for military service in 1942 into the Army Air Corps.  His hopes for combat assignments were not fulfilled so he volunteered for infantry duty with the 106th Infantry Division known as the Golden Lions.  He was assigned to Company B, 423rd Reg. of the 106th, a unit with no combat experience.  On December 11, 1944, this unit took position at the eastern tip of the Schnee Eifel in Germany, the most forward position of the U.S. Army.  On December 16, 1944, this was the precise point where the German Forces launched a massive offensive and began the Battle of the Bulge.  The 422nd, 423rd, and 424th Regiments were cut off from Allied forces after maintaining their position.  They were then ordered to attack German forces at the bridge in Shönberg, Belgium to attempt a breakout.  Out of supplies and ammunition, the units faced a German force ten times its sized and were forced to surrender.  Sgt. Dimas then spent the rest of the war in several POW camps.


Shortly after his release from service, Dimas participated in the organization of American Legion Post #41.  He is listed as one of five participants in the Organization Meeting dated November 23, 1945.  He was soon working for the Water Department of the City of Phoenix from which he retired in 1975.  His service to country continued with service in the Arizona Army National Guard and the Arizona Air National Guard. Pete was awarded the following: Bronze Star, Combat Infantry Badge, Purple Heart, and the WWII Victory Medal.