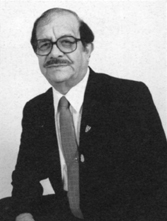 Frank Q. Carrillo was born in Williams, Arizona. After his graduation in 1948, he immediately joined the Army. In 1952 he started college and graduated from Northern Arizona University. He received the following degrees: BS in Secondary Education with a major in Business Administration; Masters in Counseling and Guidance with a minor in Social Studies and in Music.

He was married to Dalia and they had five children; three reside in Arizona and one resides at Holloman Air Force Base in New Mexico. Al, a son, resides in California.

He was a LULAC member for over 32 years. Carrillo, as a man of integrity and many accomplishments, dedicated and committed his energies for the improvement of the community and education.

He was recognized for his achievements and presented with a number of awards including a special Korean Award that was presented to him in Seoul, Korea in 1988. At the LULAC National Convention in Dallas, Texas, Carrillo was the recipient of the National Aztec Award for Civil Rights. On the 4th of July 1998, Belen B. Robles, LULAC National President, presented the award.

Frank Q. Carrillo was a Certified School Psychologist, a Certified Administrator, and he held a lifetime Junior College Administration Certificate. He was a Talent Search Director with the Department of Health-Education and Welfare. Carrillo was an educator for 32 years and retired as a Counselor after 22 years with the Phoenix Union High School District.

Frank Q. Carrillo traveled to South America, Europe, North Africa, and the Far East to Japan, Korea, Indonesia, and Hong Kong. He visited a total of 19 countries. He served with the Occupation Forces in Japan in 1948-50. He served in the Korean Conflict during 1950-51, and he was honorably discharged in 1951. During his time in the Korean Conflict he earned five Battle Stars, the Bronze Medal, and the Republic of Korea Presidential Citation. His experience and influential contacts had a great impact statewide and nationally upon individuals and society.